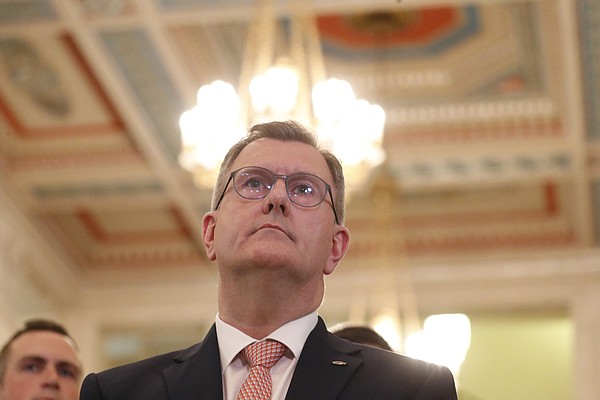 LONDON — Northern Ireland’s second-biggest political party on Friday blocked the formation of a working legislature in Belfast, and said it would keep up the boycott until the U.K. government tears up post-Brexit trade rules it accuses of destabilizing the region.

The Democratic Unionist Party’s move deepens Northern Ireland’s political deadlock, which is fueling a U.K.-EU feud that could cause a trade war between Britain and the 27-nation European Union.

The Democratic Unionist Party came second in a Northern Ireland Assembly election last week that saw Irish nationalist party Sinn Fein win the most seats — the first time a party that seeks union with the Republic of Ireland has won an election in the bastion of Protestant power.

Under Northern Ireland’s mandatory power-sharing rules, that gives Sinn Fein the post of first minister, with the Democratic Unionist Party taking the deputy first minister job. A government can’t be formed unless both roles are filled, and the Democratic Unionist Party says it won’t take part unless border checks on goods moving to Northern Ireland from the rest of the U.K. are scrapped.

It stymied attempts to elect a speaker for the assembly when they met for the first time Friday, leaving the assembly unable to function.

“The [Democratic Unionist Party] received a mandate to remove the Irish Sea border and our mandate will be given respect,” assembly member Paul Givan told legislators. “Our message is now clear: It is time for action. Words will no longer suffice.”

“The protocol is a direct challenge to the principles that have underpinned every agreement reached in Northern Ireland over the last 25 years” of Northern Ireland’s peace process, he said. “It erodes the very foundations that devolution has been built upon.”

Naomi Long, leader of the centrist Alliance Party, the third largest in the assembly, said it was “a shameful day for the [Democratic Unionist Party].”

“We want to serve the public but are prevented from doing so,” she said.

Arrangements for Northern Ireland — the only part of the U.K. that shares a land border with an EU nation — have been a subject of contention in the U.K.’s divorce from the bloc, which became final at the end of 2020.

A deal was agreed to keep the Irish border free of customs posts and other checks, because an open border is a key pillar of the peace process that ended decades of violence in Northern Ireland. Instead, there are checks on some goods, such as meat and eggs, entering Northern Ireland from the rest of the U.K.

The arrangement is opposed by the Democratic Unionist Party and other unionists in Northern Ireland, who say the new checks have created a barrier with the rest of the U.K. that is hurting businesses and undermines unionists’ British identity.

Sinn Fein and the other nationalist and nonaligned parties, which collectively got a majority of votes in the election, want to keep the Protocol.

The content on any of conservativeinvestingnews.com websites, products or communication is for educational purposes only. Nothing in its products, services, or communications shall be construed as a solicitation and/or recommendation to buy or sell a security. Trading stocks, options and other securities involves risk. The risk of loss in trading securities can be substantial. The risk involved with trading stocks, options and other securities is not suitable for all investors. Prior to buying or selling an option, an investor must evaluate his/her own personal financial situation and consider all relevant risk factors. See: Characteristics and Risks of Standardized Options.

The information presented in this site is not intended to be used as the sole basis of any investment decisions, nor should it be construed as advice designed to meet the investment needs of any particular investor. Nothing in our research constitutes legal, accounting or tax advice or individually tailored investment advice. Our research is prepared for general circulation and has been prepared without regard to the individual financial circumstances and objectives of persons who receive or obtain access to it. Our research is based on sources that we believe to be reliable. However, we do not make any representation or warranty, expressed or implied, as to the accuracy of our research, the completeness, or correctness or make any guarantee or other promise as to any results that may be obtained from using our research. To the maximum extent permitted by law, neither we, any of our affiliates, nor any other person, shall have any liability whatsoever to any person for any loss or expense, whether direct, indirect, consequential, incidental or otherwise, arising from or relating in any way to any use of or reliance on our research or the information contained therein. Some discussions contain forward looking statements which are based on current expectations and differences can be expected. All of our research, including the estimates, opinions and information contained therein, reflects our judgment as of the publication or other dissemination date of the research and is subject to change without notice. Further, we expressly disclaim any responsibility to update such research. Investing involves substantial risk. Past performance is not a guarantee of future results, and a loss of original capital may occur. No one receiving or accessing our research should make any investment decision without first consulting his or her own personal financial advisor and conducting his or her own research and due diligence, including carefully reviewing any applicable prospectuses, press releases, reports and other public filings of the issuer of any securities being considered. None of the information presented should be construed as an offer to sell or buy any particular security. As always, use your best judgment when investing.

Disclaimer: Past performance is no guarantee of future performance. This product is for educational purposes only. Practical application of the products herein are at your own risk and conservativeinvestingnews.com, its partners, representatives and employees assume no responsibility or liability for any use or mis-use of the product. Please contact your financial advisor for specific financial advice tailored to your personal circumstances. Any trades shown are hypothetical example and do not represent actual trades. Actual results may differ. Nothing here in constitutes a recommendation respecting the particular security illustrated.